Aquilegia chrysantha belongs to the buttercup flower family, the Ranunculaceae. This columbine flower is commonly known as Golden Columbine or Yellow Columbine. 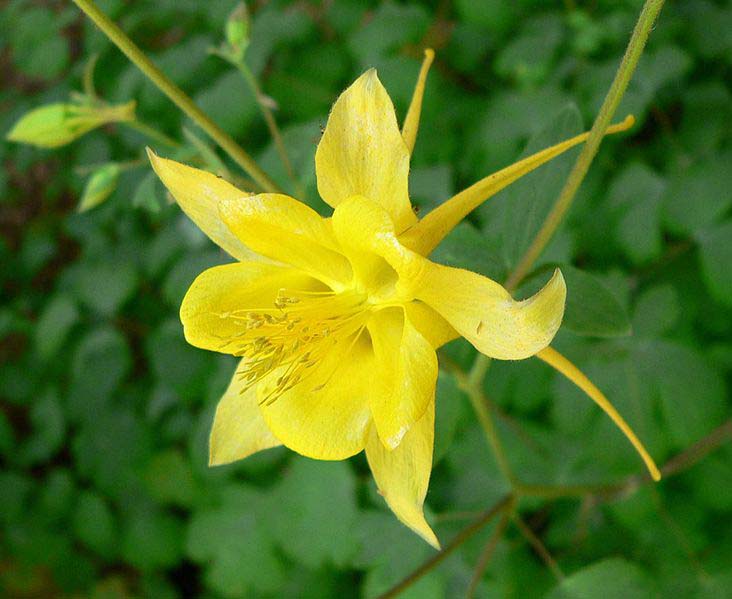 This herbaceous perennial columbine flower is native to the southwest of the USA (Texas, Utah and New Mexico).

It has large yellow flowers with spectacular long spurs! The blossoms release a lovely fragrance.

The flowering time ranges in general from late April to early June (later blooms are possible and depend on the growing region).

The flowers are not pollinated by hummingbirds because the nectar containing spurs are so long (the tongue of the hummingbirds is too short to reach the nectar).

Yet, moths in the hawkmoth family pollinate them instead. These moths have a very long “tongue” called proboscis that can reach all the way down the spurs to the desired nectar.

The wild form of these columbine flower species can grow very large in height: up to about 1.2 metres (4 feet). And they spread about 30 to 30 centimetres (12 to 12 inches). The foliage is silvery mid-green to dark green-blue. The leaves are mostly growing at the base of the plant. Each leave has typically three leaflets that are roundish and toothed.

These are very popular garden plants! They are very easy to grow and to care for. Plant them in full sun to partial shade in loamy to sandy soil. Water them regularly (but avoid to over-water them). The frost tolerance is high!

These plants are originally growing in dry regions and therefore, they are ideal plants for alpine gardens, rock gardens and woodland gardens! They also grow well in containers and foundations.

These plants are self-sowing. Deadhead them before the seeds are ripe to prevent the plant from spreading.

Flower of the Month of May!